1. Rift of Oblivion instanced dungeon has been added.

- Entrance to the Rift of Oblivion is located for the Elyos around Kojol Valley Scout Post, Asmodian Nightbloom Forest Scout Post.

- Near the entrance to the Rift of Oblivion, you can find NPCs selling additional items, like an order that lets you enter the dungeon one more time.

2. Grounded will now apply in the Advance unit Assembly Area area of Garden of Knowledge.

3. Dark Spore Road Iron Fences in the Kroban Base will now be protected be a shield that disappears once the previous barricade has been destroyed.

- Destroying the Dark Spore Road Iron Fence will disable the shield on the next barricade.

- Estima can be mounted to the High Daeva and the number of Creativity points will be added deepening on the strengthening level.

- To equip an Estima, open the Profile window (P). The number of available slots depends on the character's level. 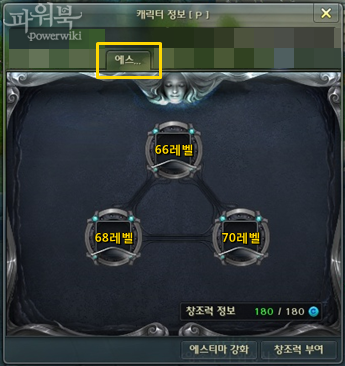 Estima details under the Character Profile 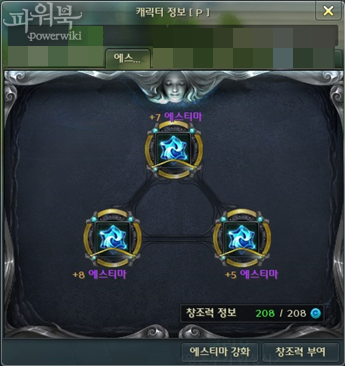 There are 3 Estima slots

※ Existing High Daevas will automatically unlock Estima slots depending on their level.

- Estima can be obtained by combining material items through Magical Crafting (Skill level 60 and higher).

- Material items can be purchased from Magical Crafting NPCs in Esterra/Nosra.

- However, a mounted Estima cannot be enchanted.

- Concentrated Estima can be dropped from some bosses in High Daeva instances listed below.

- Click on the Golden Star icon to enable/disable automatic charging.

- Golden Start item will be automatically used when the remaining Golden Star charge drops below 4%.

3. Features of some Mounts have been changed.

- Mounts can now be stored in the private warehouse.

- You can now possess multiple copies of the same mount.

4. Vital Recovery Potion can now be used by all Daevas/High Daevas.

1. Payment instructions have been added to the bottom of the Lucky Dice window.

2. When an Aethertech is riding a Mech the distance would show incorrectly. This issue has been fixed.

1. 'Rift of Oblivion' quests have been added.

3. You can now dispose quest related items from before the 'Invasion' Update.

- Since the 5.1 High Daeva: Return of Glory update you can discard unusable item through a window and receive Kinah as compensation.

1. You will now be able to acquire experience from monsters in the Ashunatal Dredgion instance.

2. Level of the Special Operations Unit in Esterra and Nosra has been changed.

1. When attacked during mount sprint, the flight time would continue to be consumed even after being dismounted. This issue has been fixed.

1. An issue that caused screen flickering in the character selection/creation window for some graphics cards has been fixed.