2. Hidden War Fortress were added and compensation in regular War Fortresses has been increased.

4. Mythical Accessories and Stigma bundles have been added to Runadium's and Rune Shield Tower's drop.

5. Compensation in Runadium (Heroic) and Rune Shield Tower (Heroic) has been increased.

6. The amount of Ceramium Coins required to buy items has been lowered.

7. Re-emergence of Upper Abyss Garrison quest-related monsters has been reduced. 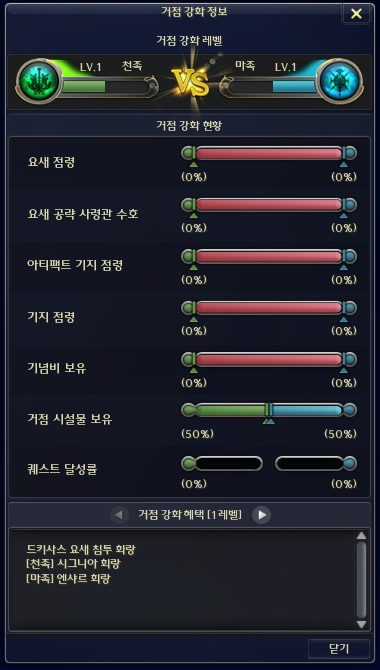 2. Stronghold Reinforcement Points can be acquired from following sources.

3. Stronghold Reinforcement benefits are as follows.

4. Stronghold Reinforcement Quests have been added.

2. Attack patterns of some Instance bosses has been simplified.
- You will now be able to restart the boss fight in you fail in following instances Rune Shield Tower, Sauro War Depot, Runadium, restarting a boss fight will reset the timer.

3. Speed of Rune Shield Tower's streams has been increased.

5. Attack power of monsters in the Baruna Research Laboratory has been lowered.
- Final boss' skills deal less damage.
- Healing powers have been reduced.
- Vitality of Guardian(Archon) Mercenaries has been increased.

- Lowered the amount of keys required to move to the central laboratory.

6. An issue with Hyperion's shield in Katalamize not disappearing when all generators get destroyed has been fixed.

1. Price of Ceramium Coin gear has been lowered.

2. Probability of obtaining Mythical Accessories from Brigade General Sita of the 40th Army and Guard Leader Achradim in Sauro War Depot has been increased.

4. Probability of obtaining Evolution materials from Runadium (Heroic) and Rune Shield Tower (Heroic) bosses has been increased, Pallasite Ingredient Box has been added to the drop.

5. Probability of obtaining Ancient Coins from boxes obtained in Rune Tribe Refuge and Cursed Argent Manor has been increased.

6. You can now obtain Ancient Coins from boxes in Sealed Hall of Knowledge.

7. Fixed probability of obtaining some items from Barracks Supply Box.

8. Not being able to remodel Princess' Dress, Gentlewoman's Dress has been fixed.

9. Issue with some item names displaying incorrectly has been fixed.

10. Issue with some items displaying incorrectly has been fixed.

1. ‘Stronghold Reinforcement’ icon has been added to the lower right corner, icon layout has been changed.

2. An icon showing whether or not transparent map is locked has been added.
- A padlock will be displayed in the upper left corner of the transparent map.
- The icon has no effect on information being displayed on the map.

3. Padlock in the Quest tracker will now be displayed at all time.

1. Issues with Level 65 Daevanion Quests
Wielding Power
(Elyos),
Wielding Strength
(Asmodian) not proceeding in some circumstances have been fixed.

3. One of Stronghold Reinforcement benefits is being able to complete Hidden Krotan/Kysis/Miren War Fortress Quests.

4. Re-emergence of Upper Abyss Garrison quest-related monsters has been reduced.

6. Issue with the Asmodian Daevanion Quest
[Infiltration] Through the Rift
not updating when moving through a Rift has been fixed.

7. Fixed an issue with the quests
A Sage's Gift
(Elyos) and
Making the Daevanion Weapon
(Asmodian) where the areas for the quests would not be displayed under certain circumstances.

8. Issue with some quests not being completable has been fixed.

9. Issue with some quests requiring Frozen materials has been fixed.

10. Issue with some Alliance/League quests updating only within a very close radius has been fixed.

11. Fixed an issue where incorrect guide information would be given upon failing some quests.

12. Typos in some quests have been fixed.

1. Issue with Balaur monsters not appearing in the Upper Abyss 65th Garrison has been fixed.

3. Emergence location of Terracrusher/Wurg the Glacier in the Upper Abyss has been changed.

4. Some NPCs in Inggison were floating in the air, this issue has been resolved.

1. Parts of Abyss terrain has been modified.

2. Parts of Pangaea's terrain has been modified.