A contracted Minion will follow the player and aid him in battle.

There are various Minions, after summoning one, it will increase your abilities and allow you to use additional skills.

- 5 new Minions have been added.

- The probability of acquiring higher grade Minions has been increased.

- The cost of Minion growth and evolution has been decreased.

- The summoning effect will increase when the Minion Growth reaches 50%.

- Minion Contracts can now be obtained in the Rift of Oblivion.

- Grade A Minium can be acquired from Mirash Refuge.

- Minion Contracts can be used from level 10.

- Summoning effect of A Grade Minions has been increased.

- Sita and Grendal's skill effects have been increased.

- Minion Growth cost has been decreased.

- Esterra/Nosra Invasion will now give more Grade A Minium.

- Minion Skills will no longer be affected by character's skill power enhancements.

● Minion Contracts allow you to contract a random Minion.

● You can manage your minions from [Menu > Minion List].

● Minions are divided between A~D Grades. They can grow and evolve.

● When you summon a Minion, you will be able to use special skills and some of your stats will increase. You will also be able to pay for additional functions like auto-looting.

● Pets and Minions can not be summoned at the same time.

To get a Minion, you will need a Minion Contract.

Minion Contracts are divided into several grades and can be obtained in following ways.

When you click on a Minion Contract in your inventory, the Minion management window appears and you can contract a random Minion. The probability of obtaining each Grade depends on the type of Contract you use. 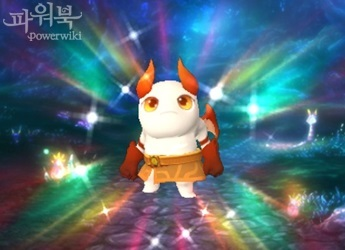 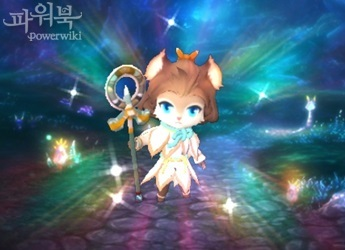 Contracting and managing Minions can be done through Minion management window. 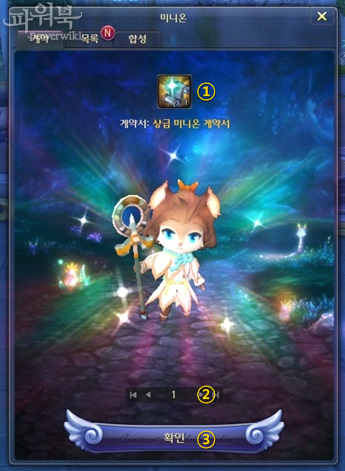 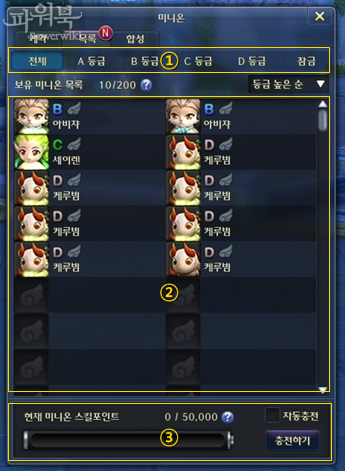 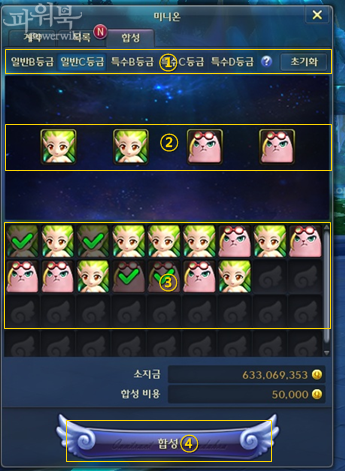 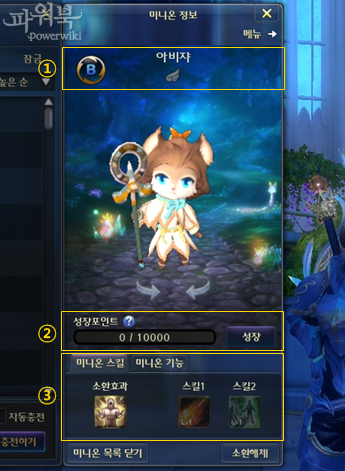 There are various kinds of Minions.

The special Cherub Minions can not be evolved, but they give twice as many Growth Points when used as material to grow other minions of the same grade.

When Minions grow up, they can be evolved up to Stage 4. (However, Kerub Minions can not grow and evolve)

First, gain Growth Points by using other minions as a material. (A small amount of Kinah is also consumed)

The number of Growth Points you can gain depends on the grade and type of Minions you use as materials.

Using Kerub type Minions of the same Grade will allow you to gain twice as many Growth Points. 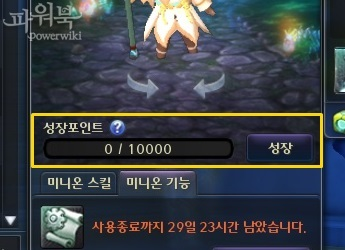 When the Minion's Growth Points reach the maximum value, the Minion can be evolved.

To evolve a Minion, you will need a certain number of Grade A Minium(s), and a certain amount of Kinah will be consumed.

When a Minion evolves, a wing icon will appear indicating the current Evolution Stage, And Minion's Skills will improve. 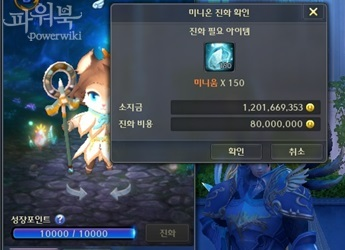 When you reach the maximum number of Growth Points,
use Grade A Minium to evolve your Minion 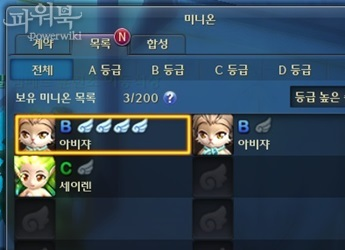 By combining Minions, it's possible to obtain a Minion of a higher grade with a certain probability.

Select 4 Minions of the same grade to combine them. All 4 minions will disappear regardless if the synthesis was successful or failed. 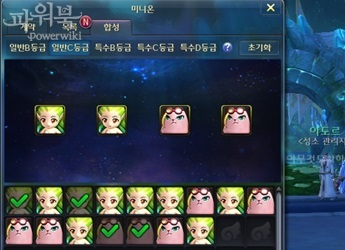 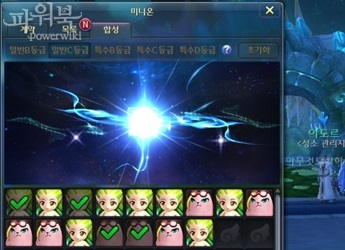 By selecting 4 C Grade Minions, you can get a B Grade minion
if the process doesn't fail (it is not 100%)

Each Minion allows you to use certain Minion Skills.

In order to use Minion skills, you first need to charge the Skill Points.

Minion Skill Points can be charged by clicking on a button at the bottom of the Minion's details window and paying a certain amount of Kinah. Using Minion Skills will gradually consume the Skill Points.

Minion Skill Points are shared among all your Minions.

① At the bottom of the Minion window, there is a Skill Points status bar, and a charge button
② You can check Skill details in each Minion's details window

Minions have the ability to increase some of the character's abilities.

Depending on the player's profession, magical of physical attributes will be increased. The bonuses depend on the Minion's grade, growth and evolution stages.

Each Minion allows you to use special Minion Skills.

With every Minion's Evolution stage, the skill effect increases. When a Minion reaches Evolution Stage 3 or higher, additional skill is added.

Minion Skills can be registered on the quick bar.

This is a summary of all available Minion skills depending on the Evolution Stage.

All Minions, except Kerub, can use additional functions.

There are 3 additional Minion functions, you can use them for 30 days after paying a certain amount of Kinah. (Common to all contracted Minions) 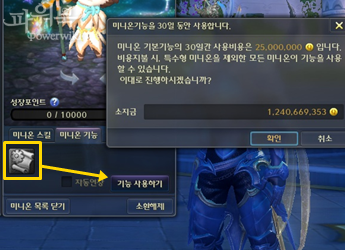 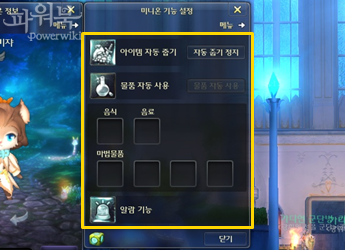 Activate selected functions by clicking on [Use function]