1. Auto-accept function has been added to the Neviwind Canyon's registration system.

- When registering a formation to the Neviwind Canyon, you can now select "Auto Accept" to automatically accept any incoming application. 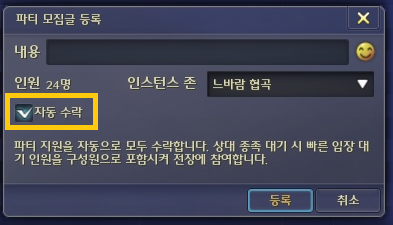 - 'Auto Accept' assures a faster entry as long as there is an opposite team already waiting for an entry.

- 'Auto Accept' is turned on by default. If you turn it off, you can configure your party by accepting or declining incoming applications in the chat.

 'Auto Accept' groups can be distinguished on the recruitment list as shown below.

2. When an artifact is captured in the Neviwind Canyon, an information will be displayed in the chat.

3. Some monsters in the Adma Ruins, and Elemental Lord's Laboratory will now give more XP.

4. In the Museum of Knowledge, when a character enters certain locations, a quest dialog would pop up. Said window will no longer obscure other party members.

5. Skills of Boliag, the final boss in the Museum of Knowledge, will no longer apply multiple times after being cast.

6. Characters will no longer be able to remove Hideous Cold used by the Narakkalli's final boss.

7. The background music would not immediately start playing after leaving the windstream in Narakkalli. This issue has been fixed.

8. When destroying prison doors in the Narakkalli instance, the sound effect would not match the situation. This issue has been fixed.

9. Abnormal movements of the hero NPC in the Narakkalli dungeon has been fixed.

10. When a team leaves Runatorium Ruins, there will no longer be any grace time.

11. Rewards for the 1st place in the Arena of Glory have been fixed.

- When a player obtained said equipment, all items will already be enchanted to +10.

- Characters that have already obtained Sprouting Daeva/Elite Sprouting Daeva items will receive one more box of each equipment to also be able to acquire already enchanted versions.

2. Elite Sprouting Daeva equipment has been changed from level 50 to level 55.

3. Colors of equipment items that can be obtained in the early stages of the game (level 1~10) have been changed.

4. Appearance of the character sometimes displaying incorrectly when performing motions while wearing certain costumes has been fixed.

1. When registering an item in the Boost/Modify window for 'Socket Manastone', 'Idian Enhancement', the level will now be displayed in yellow.

2. When registering an item in the Boost/Modify window for 'Armsfusion', the level will now be displayed in yellow.

3. Typos have been fixed in the skill section of item's tooltip.

4. When moving between servers while recording gameplay, the status icon would display abnormally. This issue has been fixed.

5. The name of 'Zephyr Shop' has been changed to 'Aion NShop'.

6. Combo boxes will now be displayed correctly in the Aion NShop.

7. The message box that would sometimes pop up in the character selection window will no longer be obscured by the Aion NShop window.

1. Minion related window would not be displayed after accepting party/alliance invites or trades. This issue has been fixed.

2. You will now be able to use <Esc> to close Minion Preview window.

1. Scroll items have been added as rewards for
Sleeping on the Job
(E),
On Your Feet!
(A) quests.

2. Typos in certain quests have been fixed.

1. The number of entries for the rift that appears when Esterra/Nosra Invasion starts is now 24.

2. Boss marking will no longer appear before the Esterra/Nosra Invasion actually starts.

3. Terrain in the Narakkalli dungeon has been fixed.

1. Growth Support NPCs have been removed from Esterra/Nosra.

- Growth Support items can be purchased from NPCs in Pandaemonium/Sanctum.