1. New crafting designs have been added.
- The Aether Key can be crafted through weaponsmithing.
- Ancient Power Shard, Activated Magic Projectile and further consumable design have been added.

2. A crafting selection system has been added.
- It is a system in which a composition of materials can be selected from several options to receive a crafting result.
- The system is only available for some designs that have been newly added. 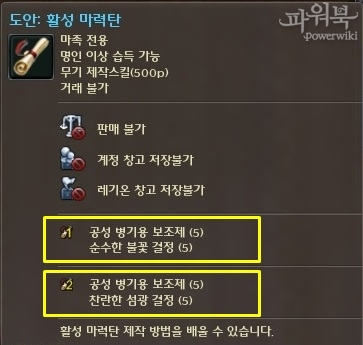 1. A Morph method has been added that change low quality potions and serums serum into a more high quality serum.
- The method can be purchased in the capital city or in the housing region at the alchemist merchant’s.
- Only potion of level 50 and lower can be Morphed.
- Morphing those items doesn't cost any DP.
- Morphable items are as follows.

2. Some Morphing Books, which can be bought in the Abyss Fortress, are now available at the merchant’s in the capital city.

1. A new substance morphing method for the Gunner, Bard and Aethertech classes have been added, in which weapon/armour crafting materials can be changed.

2. Required amount of 'Mixed Spices' has been lowered.

3. Maximum number of displayed ingredients in the crafting window has been increased from 8 to 9.