Skills have been revamped as a whole.

1. Common skills have been changed as follows.

- Remove Shock will now have a 30s cooldown and only one following skill will be available.

- Flight-related skills that have been rarely used have been removed.

2. Skill acquisition levels have been adjusted to match the new level expansion.

- Skills acquired from level 1 to 65 will now be learned in intervals till 75.

3. Some skills have been deleted or merged. For some abilities have been changed.

- Skills with similar effects and skills sharing the same cooldown have been integrated.

- Effects of some skills have been changed to passive.

(Example) Robe of Flame has been changed to a passive skill.

- Each class will now only have 2 DP skills.

4. Some skills will automatically change depending on your level.

- When you hit level 76, Raging Blow will be changed to Wild Leap.

5. Daevaion Skills have been added. 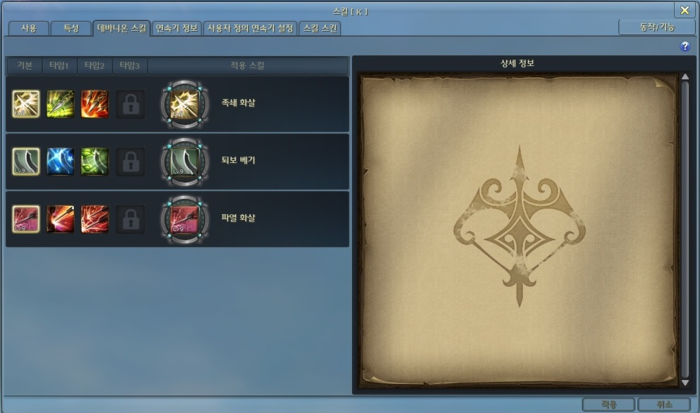 - Once you reach level 80, you can change a default skill to a new one with the desired effect.

- Daevanion Skills can be learned through a Daevanion Skillbook that can be obtained from the store, Smuggler Shukirukin, and some Instanced Dungeons.

6. You can now register up to 5 skills in the Custom Skill Chains.