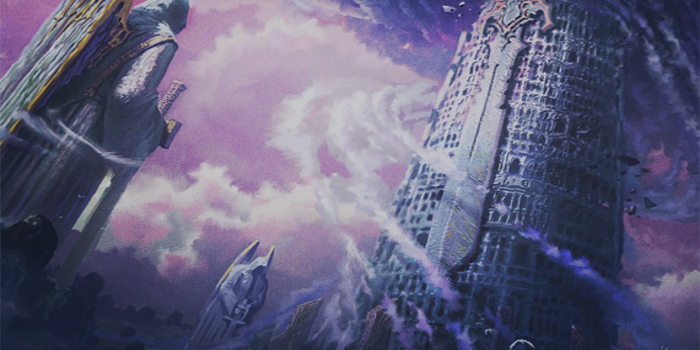 1. Tower of Challenge instanced dungeon has been added. 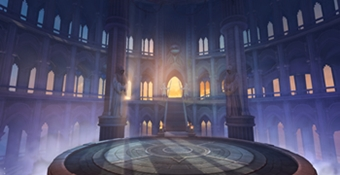 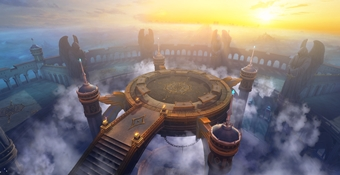 - Entrance to the 'Tower of Challenge' is located in Kaisinel Academy/Marchutan Priory lobby between the Empyrean Crucible and Crucible Challenge doors.

- The instance is composed of 40 layers, once you complete one layer, you can move to the next one.

- You earn rewards for clearing each floor. Additional rewards will be distributed for clearing floors with boss monsters. 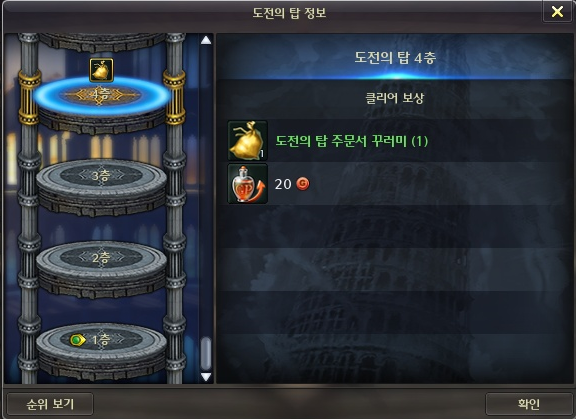 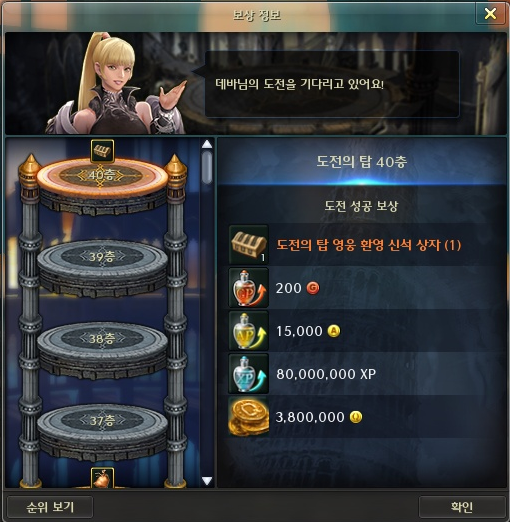 - Resurrection skills and items are restricted. If you die, you will appear in front of the entrance. (Empyrean Crucible Lobby).

However, if you re-enter, the number of entries will be deduced.

- Players can re-start the challenge from the floor that they have previously cleared. The tower will reset to the 1st floor every Wednesday.

- After re-entering the instance after the weekly reset, you can choose to start from the last cleared floor, or completely start over from the 1st layer.

- New quests have been added to the 'Tower of Challenge'.

2. Once the Tower of Challenge season begins, your score for the 40th floor will be posted in the ranking.

※ However, only up to 300 people with the best score are eligible for rewards.

- At the end of the season, players from 1~100 will receive exclusive titles and Honour Points (GP). 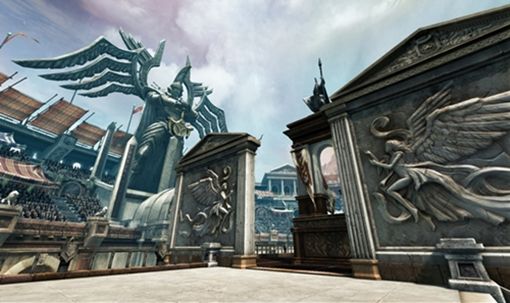 - Golden Crucible Party Bootcamp is a battlefield where two parties of 6 players compete.

- In order to enter, apply through battlefield admission button (

) as an individual player or a group.

- When a total of 16 groups composed of 6 players each, everyone is moved to the Gold Crucible Training Lobby and the number of entries is reduced by 1.

- All essential NPCs are available in the waiting room.

- When the opponents are determined, following table will be available, and after one 1min, the first battle will start. 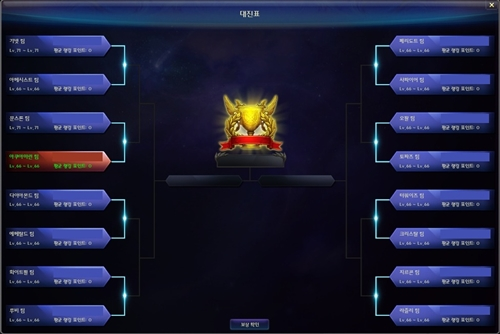 - After one minute, you have 8 min to win the battle. After 6min into the battle, some area of the stadium will start to burn.

- When you die, the resurrection delay will increase with each death.

- Some skills and items are restricted inside the Golden Crucible (Group Battles).

- The winning team is the one that wiped out the other party or scored most kills during the 8min battle.

- If both teams have the same kill count, the victory will be determined based on levels and remaining HP or the participants.

- The team that won will advance to the next battle, and the team that lost will remain in the waiting area.

- You will be compensated for winning or losing. The higher you are on the ladder, the better rewards you receive.

4. Entry times for some dungeons have been changed.

5. Termination conditions have been added to Runatorium Ruins.

- When the opposing team leaves, the remaining one will have 10min to finish the instance.

6. The way you obtain Magic Orb in Narakkalli has been changed.

- A character that has the referral item can acquire Magic Orb.

7. Skill icons of some Narakkalli bosses have been fixed.

8. The final boss in the Narakkalli instance would not occasionally destroy the ice clusters. This issue has been fixed.

9. The effect of Ice Bomb used by the last boss in the Narakkalli instance will now be removed after leaving the dungeon.

1. When all Rift entries in Esterra/Nosra have been used up, you can now use Abyss Points (AP) to increase the entry count.

- When all Rift entries have been used up, the Rift will no longer disappear, and changes to a state where additional entries are available.

- When a Rift is in a state where additional entries are available, an additional effect around the rift will be displayed. 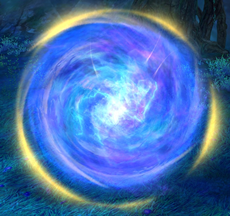 2. The way Esterra/Nosra Invasions work has been changed.

- The corridor will now appear when the invasion starts.

- You can now apply to the League before the invasion starts.

- The resurrection location has been changed.

3. It was impossible to use certain skills and summon pets/Minions in near Sanctum/Pandaemonium squares. This issue has been fixed.

4. The terrain in the Narakkalli instance has been fixed.

1. Item tooltips have been improved.

- When an item has a lot of details, the information will now be divided into multiple pages. You can see each page by using the mouse wheel.

- Details page will only display basic and optional stats.

- Details about item's evolution will be displayed on a separate page.

- Skin details will be displayed on the bottom of the tooltip.

- Skill details have been removed. Instead, you will be informed that the skills details can be viewed in the Skill window.

2. 'Item Skills' tab has been added to the Skills window. 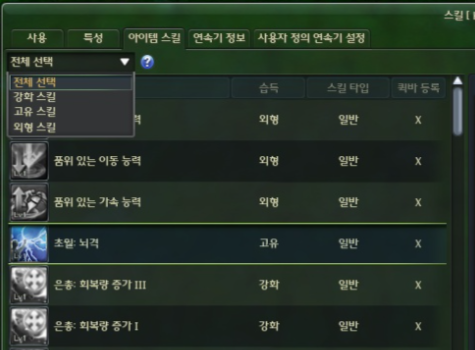 - The list will contain skills that were unlocked through enchanting/inherence/applying skins.

- You can reduce the list by selecting Enchanting/Inherence/Skin in the upper corner.

- When you equip an item with a skill, the skill icon will become active.

3. Viewer mode has been added to the Golden Crucible Party Bootcamp.

- You can watch other battles while waiting in the Gold Crucible Waiting Area by clicking on an icon in the battle chart. 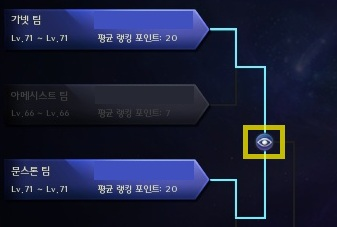 4. When the Invasion in Esterra/Nosra stars, you will now see marks on the map for transportation carts in advance.

- The mark will disappear once the transportation carts appear.

5. The details that are outputted when using certain items have been changed.

- When socketing Manastones, Idians and fusing two-handed weapons, level restrictions will now be displayed in the tooltip information in the Modify/Boost Window.

- You will now see if the Idian, conditing/Augment effects have been weakened.

6. When comparing items, the indicators of higher/lower values will now show differently.

7. The details for item's temporary treatability would not disappear. This issue has been fixed.

8. When clicking on an item link from the chat, the comparison window would not move along with the linked item's tooltip. This issue has been fixed.

9. Typos in the Boost/Modify window have been fixed.

10. Transparency of the Golden Crucible Bootcamp map has been changed.

1. Automatic charging of the Golden Star has been changed.

- When using Automatic charging function, the Golden Stars in your inventory will be used up until you are above 60%.

1. You can now transform into a Guardian in Esterra/Nosra.

2. Items that change their appearance during battle mode were not displaying properly. This issue has been fixed.

2. Additional entries to some instances from the Stronghold Reinforcement bonuses would sometimes not apply correctly. This issue has been fixed.

3. An issue with Balaurs not appearing to take back Lower Abyss Artifacts has been fixed.

1. The progress of some Eltnen quests has been changed. Additional monsters have been placed.

1. When Minion's additional function expires, the function would not automatically extend unless the player was online. This issue has been fixed.

1. The client will no longer shut down when connecting to the server.