Difference between revisions of "7.5 Update"

2. Hunting Monsters has been added throughout the fields.

- Hunting Monsters appear randomly and have a lot of HP, but special items make them an easy target.

3. Inggison/Gelkmaros Arena has been added.

- After killing a certain number of field monsters, a Rift leading to the Arena will appear.

- Up to 24 players can enter the Rift regardless of the race.

- The Arena will last for 10min, and the reward box will appear in the center when the battle starts.

4. In each area, there is a special device that can summon a special monster. They will drop special items when defeated.

5. Garrisons have been added.

- Capturing a garrison will spawn a Teleportation Device, and monsters will slightly better drop rate will appear nearby.

- If the opposite race takes control over a garrison, you won’t be able to use its feature, and a Dredgion will appear to retake it after 2h.

6. Artifacts that help players in PvE have been added.

7. Rifts have been added.

- 12 or 24 player Rifts will be generated in Gelkmaros and Inggison every hour.

- Dredgion will appear in regular intervals through the Inggison/Gelkmaros fields.

- Dredgion will spawn Machines on the field.

- Destroying the machines may grant you access to the Dredgion.

- Infiltrate the Dredgion and kill the Captain to earn special rewards.

1. Objects in the Silentera Canyon have been changed to level 80.

2. The entrance has been changed.

- Accessible every day through a corridor in Gelkmaros/Inggison.

3. The level of monsters/NPCs has been changed to 80.

4. Garrison support buffs have been added.

5. Names and rewards from Raid monsters have been changed.

6. Legendary and Ultimate items have been added to the Genesis Crystal Sale Agents.

7. The hourglass must be charged to enter.

2. The entrance has been changed.

- Entry is available every Mon, Wed, Fri, and Sun from Inggison/Gelkmaros.

3. Legion Miner has been added.

- Drill Carve Stone can be used to occupy a Mining Camp.

- Drill Carve Stone can be purchased and used only if the Legion is level 8 or higher.

4. Names and rewards from Raid monsters have been changed.

5. Some limited-sale items from Altars have been changed.

6. Alter rewards have been changed.

7. The hourglass must be charged to enter.

1. The entrance has been changed.

- Travel through a corridor in Inggison/Gelkmaros every Tuesday, Thursday, Saturday and Sunday.

2. ‘Unstable Hall of Knowledge’ dungeon has been added. Players can enter it on a first-come, first-served basis.

- The entrance is located at the Lake of Solitude in Red Katalam (North).

- The corridor will reappear 1h 50min ~ 2h 10min after disappearing.

- The corridor appears for 30min and will disappear after 20 players have used it.

4. Key Points configuration has been changed.

6. Key Points rewards have been changed.

7. The way players acquire Treasure Chests has been changed.

- A key, which is required to open the chests, can be obtained from Garrison battles.

- There is a certain probability a fake chest will appear.

1. Pandarung Infiltration for solo players has been added.

- It can be accessed from Red Katalam (North) using Mysterious Transformation Potion. This Potion can be looted from Garrison Officers and Assassins with a certain probability.

- Pandarunerk's Port Teleport Scroll can be obtained from Cargo Boxes hidden in the starting area.

- There are a total of 16 Pandarunerk's Port Teleport Scroll which can teleport players to Pandarung Dock, the final battle stage.

- The Express Cargo Box can be claimed by only 1 player and if after 20min no one obtains it, the Infiltration will end.

1. Bassen Fortress/Prades Fortress have been added.

- Use the corridor to move to the Siege area.

- Only players with the [Title] Fierce Challenger of Katalam (7 days) title can enter.

- [Title] Fierce Challenger of Katalam (7 days) can be traded for Ultimate Blood Mark at the Red Katalam Exchanger.

- The corridor maintains active between 21:00 and 24:00 and will reappear after being closed.

- The race that kills the Balaur Guardian General will occupy the fortress and Victorious/defeated races will receive encouragement buffs and rewards via mail.

2. Inggison/Gelkmaros Fortresses have been added.

- The siege starts every Tuesday, Thursday, Saturday, and Sunday at 22:00.

- Elyos/Asmodian Fortresses will be returned back to Balaur before the siege starts.

- The Balaur Guardian General appears at the beginning of the siege and the race that kills it first will take control over the fortress.

3. Lakrum and Dumah Fortresses are now closed and no longer become vulnerable.

4. The difficulty of Dumah Altar has been increased by increasing stats of Altar-related objects.

5. The Divine Fortress becomes vulnerable every Tuesday, Thursday, Saturday and Sunday at 22:00

1. Field Fame System has been added.

- You can see your Fame level at the top of the minimap.

- The field window can be accessed by clicking on the icon on the minimap.

- Fame Points will be reduced if you die from a monster attack but can be restored by a Soul Healer.

- Every Monday, your points will be reduced based on your level.

2. Fame Rifts that can be opened to Inggison/Gelkmaros by players with high enough Fame level have been added.

- Rifts can be opened by players that meet Fame level conditions using a special item.

1. New ‘Infinite’ gear has been added. It can be indefinitely enchanted.

- Infinite equipment consists of weapons and Armour parts and can be sold at the broker.

- Can be enchanted with Ultimate Paragon Enchantment Stone.

- If the enchanting process fails, there is a chance the item will be destroyed.

2. Vision weapons with special skills have been added.

- Depending on the weapon’s characteristics, different vision skills, like silence of paralysis, will be available.

- The skill effect can be strengthened by enchanting the weapon.

3. New Cubic items have been added.

4. Some Scrolls have been changed.

- The regions you can access with General Return Scroll have been changed.

- Lakrum Neutral Base Teleport Scroll and Demaha Neutral Bind Point Teleportation Scroll can now only be used in those regions.

- The list of instances a Superior Bonus Entry Scroll can reset has been changed.

5. Daevanion Skill Boxes can be obtained from the following instances.

6. Ultimate Starlight equipment has been added.

- It can be obtained by upgrading Light Fragment equipment into Ultimate Blinding Starlight equipment.

7. Blessed Manastone Fastener and new Supplies have been added to the Magical Crafting.

- Blessed Manastone Fastener can be used to open Odian/Rune Slots.

1. Accessory-exclusive Odian system has been added. 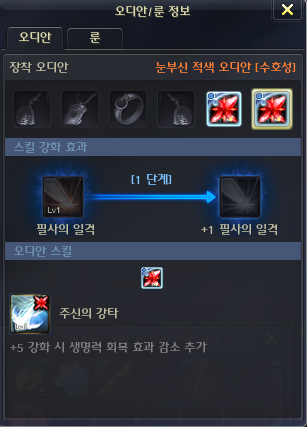 - Odians can be equipped into Necklaces, Earrings, Rings, and Belts.

- Only Odians that match your class can be used and attached Odians can be removed.

- The Odian slot must be first unlocked before being able to attach an Odian.

- When an item with an Odian is equipped, you can use the normal or Odian enhanced skill.

- You will need multiple Odians to be able to use the Odian Skill. To enhance the skill, you will need to polish the Odian.

- Equipment with Odians can not be sold or stored in the account warehouse.

1. Feather-exclusive Rune System has been added. 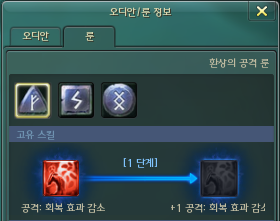 - The Rune slot must be first unlocked before being able to attach a Rune.

- Equip runes to active a unique passive skill, and polish them to strengthen the effect.

- Your transformations can be enhanced based on your Rune combination.

- Runes/Odians can be strenghten by grinding and polished through the Boost/Modify Window.

- Odians/Runes can be polished using the Ancient Refining Stone.

- If the polishing process fails, there is a chance your Odian/Rune will become Contaminated. Contaminated items can no longer be polished.

1. A new group dungeon, Altar of Ascension, has been added.

- There are different rewards in the Easy, Normal and PCroom versions of the dungeon.

- Altar of Ascension gives different rewards based on your time.

- Altar of Ascension quests have been added.

1. Some Instanced Dungeons have been removed.

2. [Mission] tag has been removed from growth instances.

3. Makarna of Bitterness (Hard) has been added.

- The Instanced Dungeon shares the cooldown with the Prometun Workshop (Hard).

- You can obtain materials required for Blinding Starlight equipment there.

4. The score and appearance conditions for the Dredgion monsters have been changed.

5. The spawn times for items in Runatorium have been changed.

6. Teleport NPCs have been added to Runatorium.

7. Ambush used by Girad in the Tower of Challenge will no longer trigger the Remove Shock Icon.

8. You will now obtain more Kinah from the 8th floor of the Tower of Challenge.

9. Only up to 30 players will now receive rewards for the best score in the Tower of Challenge ranking.

- The ranking rewards have been changed.

10. The duration of some Battlefields and Arenas have been chaned.

11. If you successfully kill 4 bosses in the Prometun Workshop, and the final boss in Makarna of Bitterness, there is a chance to receive an additional reward box.

12. The respawn position after dying inside the Esoterrace Instanced Dungeon has been changed.

13. The drop from the final boss inside the Esoterrace Instanced Dungeon has been changed to come from the boss directly.

14. A Pcroom-only version of the Esoterrace Instanced Dungeon has been added.

15. Entrance locations to some dungeons have been changed.

1. Valley of Chaos Battlefield has been added.

- In the Valley of Chaos, everyone battles with the same stats.

- The game lasts for 10min and whoever accumulates more points at the end or earns a 2,000 points advantage will win.

- You can obtain root, Aether's Hold, and scarecrow polymorph items from boxes that appear on the fild.

2. Level 55 constraints have been removed.

- At level 55, if you gain enough experience, you will level up to 56 without any additional requirements.

1. Lugbug Missions have been changed.

1. Flight, Satigma and Minion tutorials have been changed.

2. Some quests in Lakrum/Dumah have been changed.

3. New quests in Lakrum have been added.

4. New quests have been added to the Gelkmaros/Inggison regions.

5. Quests that can no longer be completed have been removed.

6. New quests have been added to the Valley of Chaos.

8. Quests for the Legion Mining Camp have been added.

9. New Quests have been added to the Silentera Canyon region.

10. New quests have been added to the Unstable Hall of Knowledge.

11. Tooltips and targets for the Legion Tasks have been changed.

12. New quests have been added to the Makarna of Bitterness (Hard).

13. Experience Mark quests can now be performed in Gelkmaros/Inggison.

14. Quests to earn Fame have been added.

16. Windstream quests have been changed.

17. Some quests have been changed to reflect the changes to the growth areas.

1. Signia/Vengar regions have been removed.

2. You can no longer move to Signia/Vengar regions.

1. Red Katalam (North/South) has been added to the entire world map.

2. The death Menu will no longer appear upon death in the Coliseum Training Arena.

3. World system messages upon item acquisition have been changed.

- the message will no longer appear when someone acquires a Legendary item.

- The world message has been changed as follows.

1. The Growth areas of Heiron/Beluslan have been changed.

- Some Teleport Bases have been added.