1. The automatic Combat Support function has been added. 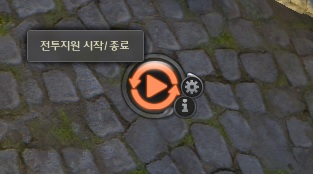 - The shortcut for the Combat Support Start/Stop is set to Shift+A, you can change the settings under [Options] - [Key Mapping] - [Function].

- Combat Support Statistics are updating in real-time, and will reset once the function has been turned off.

- Combat Support will not be available if the combat in impossible, including death, mounting and flight.

- Combat Support is not available in Groups/Alliances.

- You won’t be able to join a Group/Alliance when the Combat Support is active.

- While the Combat Support is active, all Group/Alliance invitations will be rejected.

- While the Combat Support is active, the camera will be fixed on the character.

- Certain monsters and NPCs might be excluded from the Combat Support. 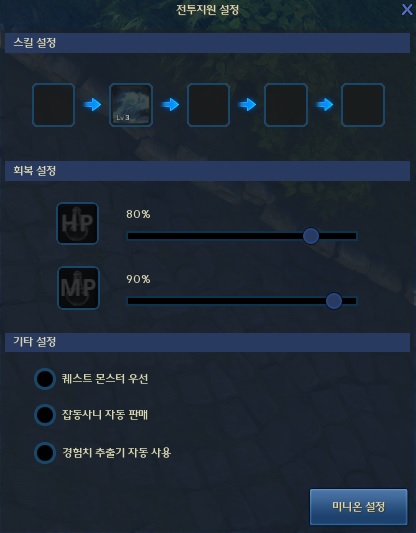 - You can register up to 5 skills. Open the skill window (K) and drag the desired skills to empty slots.

- With chain skills, registering the 1st skill will make the character use the whole chain.

- With Charging skills, the character will use the maximum charge level of the skill.

- with range skills, the character will move to the required range before using the skill.

- When all skills are on cooldown, the character will perform normal attacks.

- HP/MP recovery items can be dragged to empty slots and used to maintain specified health.

- By selecting Sell Junk Automatically, junk items will be sold when the inventory is full.

- By selecting Extract XP automatically, your XP will be extracted when it reaches 90% as long as the required items are in the inventory.

- The Minion Info window can be displayed via the Minion Setup window.

3. AP gain from some instances has been fixed.

1. The exchange method for the rewards from the Competitive Honour Points ranking and Arena of Discipline has been changed.

2. Some weapons were invisible during combat. This issue has been fixed.

1. The effect of “[Skill Card] Robostrike” has been fixed.

1. Extreme Weapon/Armour boxes and XP Potion will now drop from monsters in the following areas.

2. Monsters related to the
A Knife in the Heart
mission will once again respawn properly.

1. Guardian Angels would to output certain motions. This issue has been fixed.

1. The motions of some NPCs were awkward. This issue has been fixed.

2. The drop rate of some monsters in Heiron, Beluslan has been adjusted.

1. Players could access some Dumaha Alters without destroying the gates. This issue has been fixed.