Abyss Points are the points used to determine your rank within the PvPvE game world. They can be earned through normal Player versus Player (PvP) combat when defeating other players, or by defeating Balaur. You will also be given Abyss Points for defeating any NPC within the Abyss and Balaurea. These points can be lost, however, if you spend them or if another player (or one of the Balaur) defeats you in battle.

To view your current Abyss Points as well as your rank, open your Character Window [P] and select the "Abyss" tab. 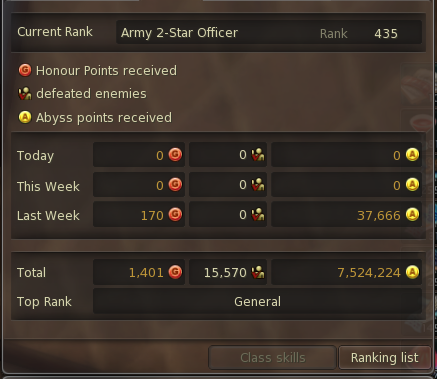 Abyss Points directly affect your PvPvE ranking. Abyss rank signifies the ranking order of each player within their faction. The more Abyss Points the higher your rank. If you lose points it is possible to go down in rank. There are 18 ranks available, ranging from the lowest "Soldier, Rank 9" to the highest " Army Govenor". The highest of these ranks will receive unique abilities only they are able to use. However, these abilities will only be available within the Abyss and some parts of Balaurea. If you lose a rank that offers these abilities, you will lose acces to them.

Your rank will determine how many points you will receive when defeating an enemy Player or Balaur, or how many you’ll lose when defeated. Also, each rank above "Soldier, Rank 1" is limited to the number of players that can hold that rank. Below lists ranks, point requirements, and Abyss Point gains and losses for an enemy of the same rank as you.

Abyss Points can be used to purchase various items from Contribution vendors. These items can be anything from armour and weapons to consumables and recipes. The vendors for these items can be found in both Sanctum and Pandaemonium, as well as within the Abyss at Primum Landing and Teminon Landing. For more recent items go to your faction's stronghold or to Hall of Fame (Elyos) and Temple of Honour (Asmodian). For a more up to date designs go to the Upper Abyss.

In order to purchase these items, you will need to spend Abyss Points. The amount of points needed will depend on the item’s minimum level and its quality. Some of the higher quality items will also require Silver, Gold, Platinum, Mithril or Ceranium Medals received from Fortress Sieges as well as some instance rewards.

For a list of fortress vulnerabilities, please see our Fortress Siege Times page. 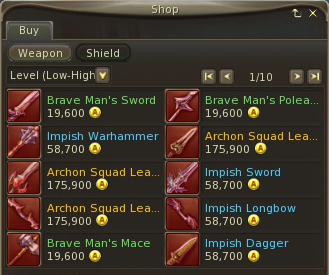 These require Medals as well