- new Faction Quests have been added.

- Faction Dispatch Quests have been changed.

- Teleport Shugos have been replaced by teleportation devices.

- Required Glory to use teleportation devices has been replaced by Faction Prestige.

- The use of teleportation devices will now consume some goods.

2. The agents participating in the Apsharanta Agent Battle have been changed.

3. Faction Quests will now be selected based on operation site and Dispatch Quests reset time.

6. Stats of Garrison Guard NPCs have been increased.

7. Some terrain errors have been fixed.

1. Heart of Apsharanta (Normal) have been added.

2. The probability of obtaining Jorgoth equipment from Makarna of Bitterness (Normal) has been increased.

3. Players will no longer be teleported to Griffoen/Habrok after leaving Discipline Training Grounds.

4. The number of entries to Makarna of Bitterness (normal) has been changed to 10.

5. The number of entries to Beninerk’s Manor (normal) has been changed to 4.

6. The amount of AP players can obtain from Hererim Mine has been adjusted.

1. With Faction changes, the Lord’s Relic principals have also been changed. 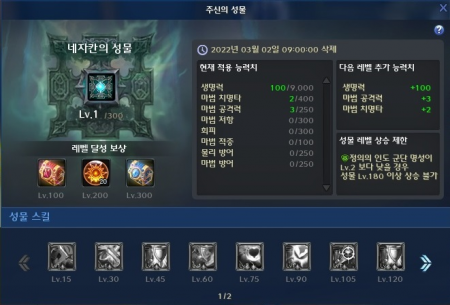 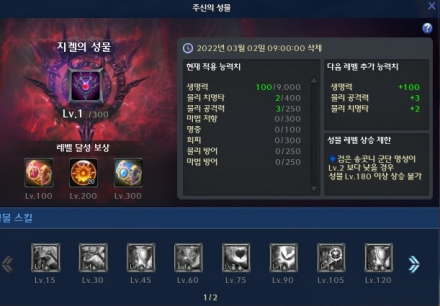 2. Level achievement rewards have been changed.

- It can be purchased with 군단 활동 증표 from <Operation Field Soldiers>.

- The item can also be crafted with Magical Crafting

1. Dispatch Quests have been reorganized.

- When you reach a certain Faction Fame Level, the number of dispatch quests will increase.

- Different rewards are given for each Dispatch Quest completed.

- Related details can be viewed in the pop-up window in the Dispatch Quests.

2. Faction Quests will now be selected based on operation site and Dispatch Quests reset time.

3. Repeatable quests have been added to the Heart of Apsharanta (Normal).

1. A new season of Kerubar's Quick Guide has been added.

- In the 2nd season of Kerubar's Quick Guide, you must first complete all of the Rapid Growth I steps to unlock the next guide.

1. Factions have been replaced, and all of the existing Faction’ Glory will be reset.

2. Some items, prices, and number of purchases in the Glory Shops have been changed.

3. The number of Glory deduced each week has been changed.

5. Glory XP rewards from quests have been adjusted.

2. Recipes for crafting equipment items have been added.

- Use Experience Mark and Ancient/Legendary/Ultimate Magic Crystals as materials.

- The recipes are learned automatically and can be found under Magical Crafting - Miscellaneous.

- All party members can obtain them from the last boss in the instances listed below.

- The grade of the Crystal is based on probability but the chance to acquire the specified number is 100%.

- It can be obtained with a certain probability when extracting Ultimate Fighting Spirit Armour.

7. The sound when flying backward while wearing any of the 4 types of ***moon Wings has been changed.

1. New type of gatherable, ‘Vents’, has been added.

- When 아다드 appears, a large number of Vents will also appear.

2. XP from some monsters has been increased.

3. Glory from some monsters has been increased.

1. The damage of all monsters has been adjusted.

2. The level of all monsters has been adjusted.

3. The XP from all monsters has been adjusted.

1. 2 영혼s will now appear with 100% probability, and the number of 사로잡힌 영혼 that can be obtained from Souls has been increased.

1. PVP Enchantment stones could not be purchased from the Gold Sand Shop. This issue has been fixed.

1. Some terrain errors have been fixed.