This release includes the 2.1 updates from Korea, and many additional fixes for the English client. We have tracked down

14. Changed the appearance of the "Dragonbound Shield" item.
15. Fixed the tooltip for the "Defender Captain’s Jewel" so that it shows the item’s stats correctly.
16. Moved some gatherable items from areas where gathering is not permitted.
17. The issue of some items appearing incorrectly upon equipping has been resolved.
18. Fixed the system message that appears upon using an Explosive Bead in Kromede’s Trial.
19. Changed level 55 “Stalker’s” item series to “Tracker’s” items to distinguish them from the level 50 Stalker’s series.
20. Changed “Graveknight Candy” to “Graveknight Candy” to match the monster that it transforms you into.
21. Changed the names of some quest items, which had mistakenly been given the same names as the quests they belong to:

22. Changed the dictionary names of some items, where they did not match the names of the items themselves:

[Chantra Dredgion] 1. Fixed a problem causing the bulkhead between the Armory and Gravity Control not to show up sometimes.
2. Fixed an incorrect system message that popped up when a player trying to enter Kromede’s Trial was not eligible to enter it.
3. Fixed a bug causing the entry level for Alquimia Research Center not to display properly.
4. Fixed an error in the resurrection popup message that appears when a character is in an instance where they can resurrect at the beginning of the instance. This popup would only display when a character had left their group and then died.

1. Platinum Medal quest NPCs and Special Ordnance Quartermaster NPCs in the Balaur Fortresses will always spawn while the friendly faction is in possession of the fortress.
2. Modified the type of weapons equipped by the Elite Aetherguards that Ulsaruks summon through Illusion Gates.
3. Fixed a bug causing Stormwing, the final boss in Beshmundir Temple, to be aggroed by certain summoned pets.
4. Fixed a bug where Saira Sharpeyes’s (boss monster in Gelkmaros) max HP was set abnormally low.
5. Changed the design of certain daily quest NPCs’ costumes so as to be more distinctive.
6. Fixed the bug causing guard NPCs by the Balaurea fortresses and artifacts not to be able to detect targets in basic stealth.
7. Fixed the buttons on a handful of NPC vendors’ text windows back to the default buttons. (They had mistakenly been changed to player dialog.)
8. Fixed the dictionary entries (blue links in quest text) of a number of monsters so that they matched the monsters’ actual names, including: 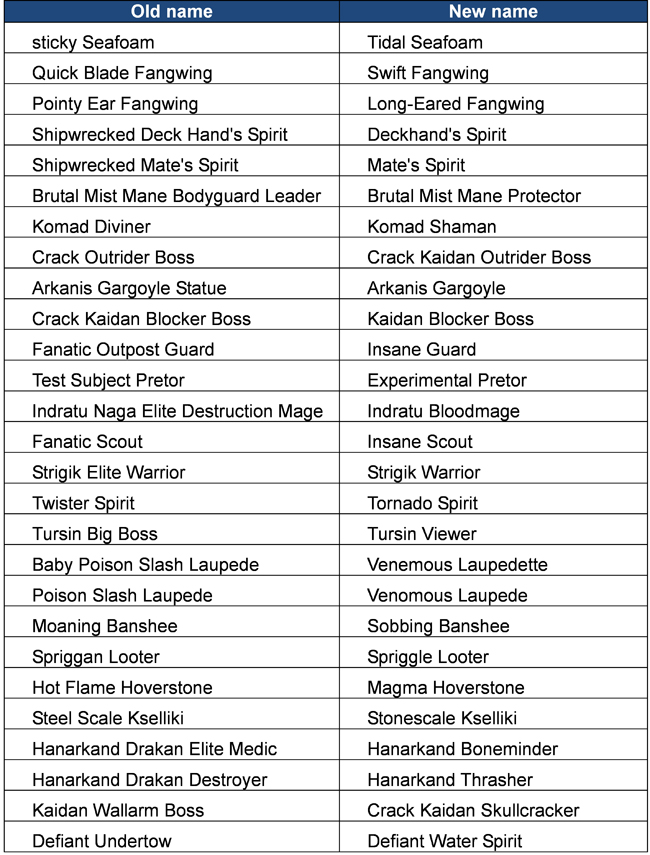 9. Changed the names of the following monsters to match their dictionary names, because they were too vague and causing confusion with other, non-Lepharist monsters: 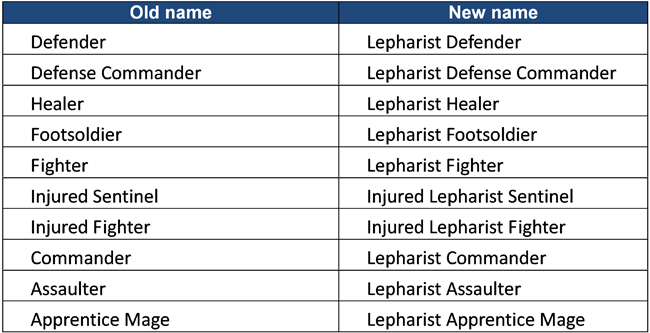 10. Changed the name of the Lepharist boss monster “Scout Captain”, in the Halabana Hot Springs in Morheim, to Katerios, since he was supposed to be a named monster.
11. Fixed a bug where NPC Harami in Inggison was mistakenly named “Design: Platinum Glasses”.
12. Fixed typos in the dictionary links of various NPCs to make them match the actual names: 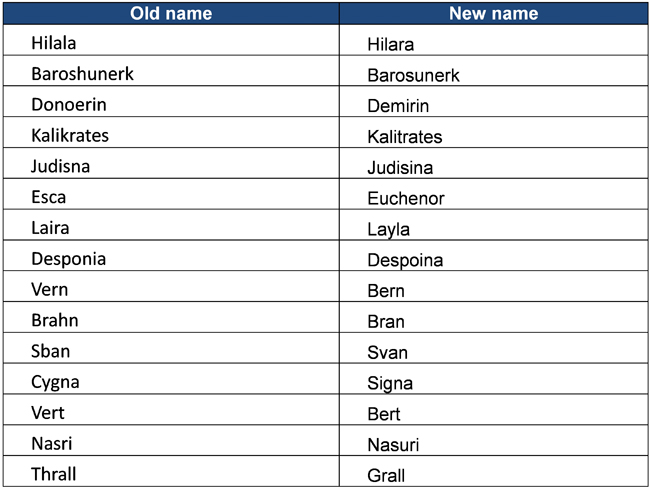 1. Added information to the tooltip for the Sorcerer’s “Barrier of Severance I” skill about its damage absorption effect.
2. Fixed a bug that would occur while players were transformed with that increased HP/MP. When certain skills were applied to players in this state, HP/MP would suddenly decrease as if the transformation effect was not active. This has now been fixed.
3. Energy of Repose now grants additional Exp. for quest completion and gathering/crafting.
4. When an Assassin checks “Only high-level skills are displayed” on the Active skill pane, "All-Seeing Eye I" and "Searching Eye I" skills will now display correctly.
5. Fixed a bug causing Chanters to automatically acquire a skill when their Boost Physical Attack I skill reached level 25.
6. Changed some items that were referred to as “Oruga’s” items to say “Kinquid” to match the monster that drops them. (There is no Oruga.)

2. Group members can now simultaneously collect items for solo Greater Stigma Quests.
- [Elyos] Taloc’s Heart Full of Soul, [Asmodian] Stigma Expansion
3. [Asmodian] Fixed problems that were hindering players from completing Stigma Expansion.
- Fixed the problem where Drakan Researcher wasn’t dropping quest items.
4. Added Drakan Researcher to the link in the Quest Description window.
5. Modified the temporary quest marker so that it will no longer be displayed when a quest updates because the player acquires Kinah.
6. Added new quests that give out fabled class rewards in Inggison and Gelkmaros.
- [Elyos] A Weapon of Worth, [Asmodian] A Helping Hand
7. Fixed a bug in the [Group] Pressing the Attack quest where, even if a player hadn’t completed the first part of it, the lettering would turn gray as if they had finished the second part.
8. Fixed the error message that showed up unnecessarily for the [Elyos] Allergic Reaction quest reward.
9. Fixed a problem where the following bundled [Asmodian] Field Warden armor items could not be unwrapped:
- Fugue Vambrace Package (3 days)
- Fugue Vambrace Package (7 days)
- Fugue Vambrace Package (14 days)
10. Increased the quest timer on the following Beshmundir Temple quests from 5 minutes to 7 minutes:
- [Elyos] To Liberate Souls
- [Asmodian] Mired Souls
11. Added level 55 greater stigma solo quests.
- This quest can only be acquired if you do not have the existing level 55 greater stigma quest in your quest journal, even if you have completed that quest and are at the reward stage.
- If you have the existing quest and wish to get the new quest instead, you must abandon the old quest.

12. Added new Groggie (Shulak coin) daily quests, which can be undertaken without joining a daily quest faction. Also, for the Groggie, greater stigma quest items, weapons, armor, and other items can be exchanged.

13. Changed some Platinum Medal reward quests to daily quests. Greatly decreased the number of items that need to be collected.
14. [Elyos] Decreased Exp. and kinah rewards for the “Teleporter Repairs” quest.
15. Fixed typos in some quests.
16. Fixed a bug causing some campaign quests to be re-acquired after a player had already completed them.
- If you have been affected by this bug, and have a re-acquired campaign quest in your quest journal, the game correctly treats that quest as if it has been completed.
17. Renamed Reshanta [Elyos and Asmodian] quest “Giant’s Core Weapon” to “Petralith’s Cores”, to make it clear that it’s connected to the Petralith monsters. Renamed all associated quest items accordingly, and made their dictionary links match when there was a discrepancy:

1. In order to give players an additional warning before deleting a character, changed deletion message at character selection screen from ‘Enter”Confirm Delete” to delete this character.’ to ‘If you delete your character, the items in your inventory, private warehouse and mail box will also be deleted. If you still wish to delete your character, please enter “Confirm Delete”.’
2. Fixed the Gelkmaros map so that Spiritfall Gate now shows up correctly.
3. Fixed the legion window so that the “last logged in” information will be updated when said window is closed then reopened.
4. Upgraded AionTweet from v0.7 to v1.0, and added some new functions.
- You can now join Twitter directly from AionTweet: 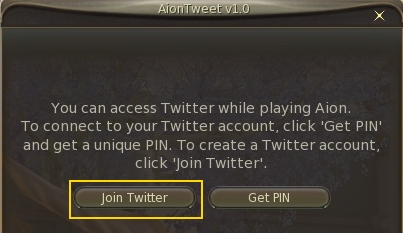 - Added a [Suggested] button in lower left of the AionTweet screen. Click this to get a list of suggested Aion-related feeds: (There are currently no suggested feeds for the NA/EU market. We will add these in an upcoming build.)

- You can search for any Twitter user on the [Search People] tab. This will display the same results as using the search box on the Twitter homepage:

- You can change your Twitter profile using the [Profile] tab: 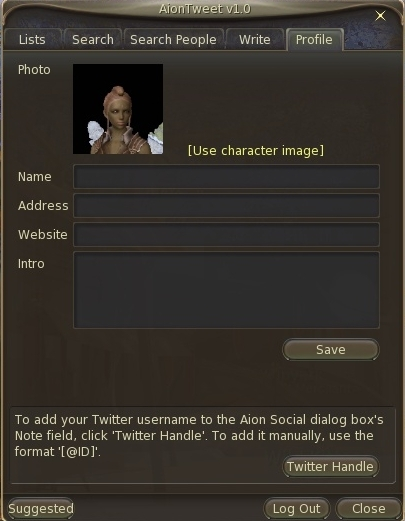 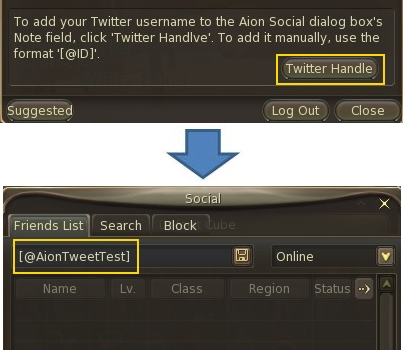 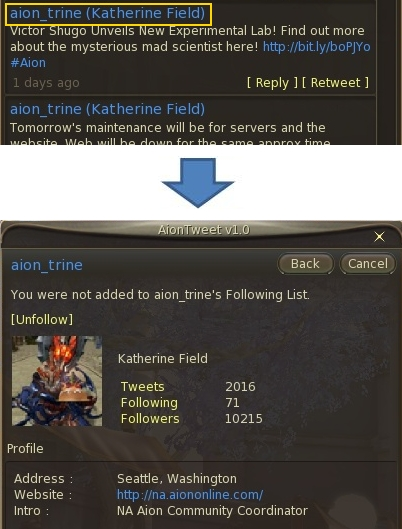 1. Fixed a bug that occurred when players used the “raise camera angle” option while in a windstream. Camera will no longer be locked looking up at the sky.
2. Fixed the arrows for the Altar of Avarice and the Temple of Scales on the signpost in Angrief Ruins in Inggison.
3. Fixed the problem where characters were not able to make any motions while activating artifacts in Balaurea.
4. [Abyss] Changed all siege weapons so that they can now only be used near the fortress
5. Fixed terrain bugs in both Inggison and Gelkmaros where characters were able to access areas that were intended to be inaccessible, giving them an unfair advantage over the other faction.
- You can no longer set up a kisk in these areas.
- Spiritmaster’s can no longer use their "Summon Group Member I" skill in these areas.
- Players who log on in these areas will automatically teleport to their obelisk bind point.
6. Fixed a bug with the Gatekeepers in Gelkmaros, where players could bypass them and get through the gates they guarded.
7. Fixed a bug in several parts of Mitrakand, in Gelkmaros, where players would get stuck inside the terrain and buildings.
8. Fixed a bug allowing players to get through a wall inside Eltnen Fortress 9. Fortress Siege times have been updated
10. Protected areas have been updated in Gelkmaros and Inggison

1. There is an issue with the face sliders during character creation. Dragging any of the sliders (except ‘facial ratio’) will cause the whole face on the character model to become invisible until the slider stops moving.
2. Asmodian quest “A Helping Hand” and Elyos quest “A Weapon of Worth” are not currently available. If the player does manage to acquire one, it will have odd broken code in the quest journal entry and will not be completeable. 3. Pop-up message when logging into an account with characters from both races on the same server currently incorrectly states that they will not be able to access the server.