Mobility is key on the battlefield.  Thus, Atreia's most skilled scientists have researched a variety of technological and empathic breakthroughs to provide us with the latest in battlefield mobility.  These mounts and vehicles will allow Daevas to travel faster than ever!  All mounts have flight capabilities, and most have the ability to temporarily boost their speed beyond normal measures.

Mounts have the following effects:

- Mounts increase your movement and flight speed while you are riding them. The increase depends on the type of mount.
- Some mounts can be made to Sprint by pressing the <R> key (Ascend). Sprinting is a temporary boost to movement speed, and it consumes flight time.
- If you use Sprint on a hill before you jump off, you can land further away.

If you are shocked, you are dismounted 100% of the time.

All Altered State skills that affect movement speed also dismount you 100% of the time.

- Falling damage will not dismount you.
- Terrain hazards such as lava have a certain percentage chance to dismount.

Even if you take falling damage, you won't be dismounted unless you
are killed.

Like DOT damage, terrain damage dismounts you a certain
percentage of the time.

- A skill that also decreases movement speed will always dismount.
- If the skill captures the target but does not affect movement speed, there is a certain chance to dismount the target, just as when damaged.

If a capture skill decreases movement speed, it will always dismount the target.

A capture skill that drags the target but does not decrease movement speed has a certain chance to dismount.

Take a Mount for a Test-Drive!

Some of the high-performance mounts can be very hard to come by.
Even those that can be bought from NPC vendors can cost a fortune. If you complete one of the following quests, you can use a mount for an hour free!

Each mount has a fixed movement speed

A mount increases your movement and flight speed while you are riding it.

Click a mount in the cube to use it or drag it to your quickbar for ease of use. 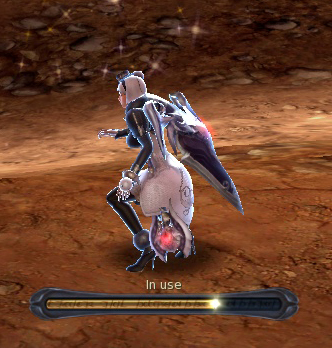 It takes about 1 second to summon a mount after you click to use it.

Mounts are stored in your cube as items. Click one, and your character will spend about 1 second summoning the mount, and then get on it.

To get off the mount, open your cube and click the icon again.