1. Stigma Set Effect has been added.

- Stigma window (Shown below) has been changed according to the new Stigma Set Effect changes. 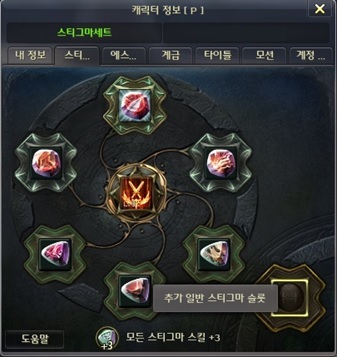 - A tooltip where you can check all Stigma Set effect has been added at the bottom of the window. 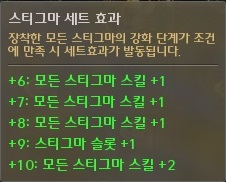 2. A regional message will now appear when Enchanting a Stigma to +9 and higher.

1. Some features of the Golden Crucible (Group Battles) have been changed to prevent abuse.

- If you leave the Golden Crucible (Group Battles) during a match, your points will be reset.

- If the whole group leaves Golden Crucible (Group Battles) during a match, their team score will be reset.

2. Monsters from wrong floors would appear in the Tower of Challenge after starting from the 1st floor after a weekly reset. This issue has been fixed.

3. You will no longer maintain is a spirit form after leaving the Tower of Challenge on the 17th, and 18th floor.

4. Exploding towers on the 34th floor of the Tower of Challenge will now work properly.

5. System messages in the Tower of Challenge will now display properly.

6. All monsters in the Tower of Challenge will now use their skills.

7. Heart of Boliag would sometimes appear behind a barrier. This issue has been fixed.

2. The appearance of some Cloths during combat has been fixed.

1. The "Additional Rewards" in the Final Score window for the Neviwind Canyon will no longer be cut in certain resolutions.

2. 캐노비칸 icon will now display properly on the map.

1. After killing some monsters, their bodies would disappear but the after-images would still be selectable. This issue has been fixed.