1. New equipment and supplement items purchasable with Battle Medals and Blood Medal have been added.
- Items can be purchased from 마고스/토스카눔에서 in the Upper Abyss.

- Blood Medal can be obtained from quests, dungeons and from occupying fortresses in the Upper Abyss. 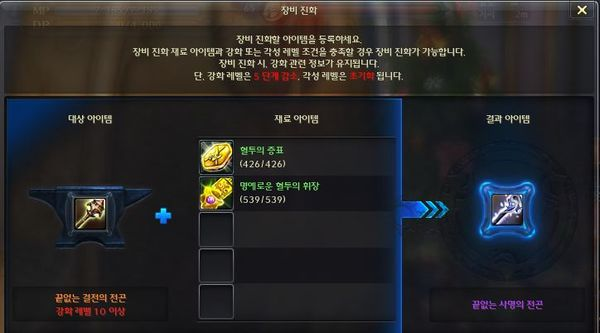 2. New Composite Manastone have been added.
- Can be obtained from new field bosses and Fortress instances in the Upper Abyss.

4. New Master designs have been added.
- With the new designs 'Divine Sauro items' can be manufactured.
- Designs can be purchased from new NPCs located in each workshop in your main city.

● Collect enough ‘Magical Stones’ and buy a desired Common/Rare Manastone from an NPC.

2. Probability of crafting a better version of Catalium-related items has been increased.

1. Low level fortress instances from the Upper Abyss can now be access through a single portal in the center of the Lower Abyss.

3. Issues with Signia/Vengar Manor Title and Kaldor compensation remaining time have been fixed.

4. Issue with some +20 items not becoming wrappable has been fixed.

5. Issues with some designs names not matching produced items have been fixed.